Novotown, the integrated tourism and entertainment project in Hengqin Zhuhai, celebrates a key milestone after developer Lai Fung Holdings Limited (“Lai Fung”) successfully obtained 280,000 square metres of land required for the project’s Phase II development. An investment project of no less than RMB 3.5-billion, Novotown Phase II will immediately kick off its construction work, with the development themed around sports and education. Having already partnered with global brands such as Real Madrid Club de Fútbol and Harrow International (China) Management Services Limited, Novotown is pleased to announce that the project’s Phase II will also be home to a motorcycle themed location based entertainment centre, following the signing of the License Agreement with its third major partner – Ducati.

Novotown partners with Ducati to introduce the racing sport to Hengqin

Bringing another international premium brand to Hengqin, Novotown and Ducati signed the License Agreement earlier in relation to the development and operation of a motorcycle experience theme centre which is planned to be launched in Phase II of Novotown. “We are delighted to welcome Ducati, one of the world’s  most renowned motorcycle manufacturers, as a new collaborator in the Phase II development of Novotown. Their passion and commitment to producing top quality motorcycles reflects the same drive that we have in making Novotown the region’s leading edutainment hub.” said John Tse, Chief Executive Officer of Novotown.

The Ducati centre will become the first motorcycle experience theme centre featuring the brand in Asia. Covering an area of no less than 4,500 square metres, it will offer experiential attractions including immersive racing experiences, exclusive Ducati exhibits, and retail concessions where Ducati fans can purchase official merchandises. “Ducati is a brand with over 90 years of history and is manufacturing sport-inspired motorcycles characterised by high-performance engines, innovative design and cutting-edge technology. Furthermore, the iconic motorcycles produced by Ducati represent the success of ‘Made in Italy’ all over the world. With a strongly growing fan base among bike lovers in China, we are glad to bring the brand closer to all those who share a passion for style, sophistication and performance. We are honoured that we have been chosen by Novotown to become part of this outstanding project and to  introduce our brand and the racing sport through the most immersive and participative experiential offerings,” said Claudio Domenicali, CEO of Ducati Motor Holding.

Novotown’s Phase II will be home to a motorcycle experience theme centre, following the signing of its third major partner – Ducati

The interactive football experience centre, which will be officially branded as “Real Madrid World”, is poised to become a world-class attraction that celebrates the most successful football club of all time. Since its announcement last year, response to the development of Real Madrid World has been positive. Results from surveys conducted by international research agency Kantar TNS have indicated that Real Madrid has very high awareness among Novotown’s key target customers, residents in the Greater Bay Area, as it is the first football club that comes into mind spontaneously.

spanning across a total area of 12,000 square metres.

When completed, Real Madrid World is expected to consist of three floors with over 20 attractions spanning across a total area of 12,000 square metres. The facility will be made up of several signature experiences including the Flying Theatre and the Stuntpit, an array of interactive training games, a walkthrough of Real Madrid history, plus dining and retail outlets.

The Flying Theatre is a thrill-ride experience from a soccer ball’s point of view. Guests will fly as the ball sails through the air and feel the bumps and jolts as it’s dribbled down the field, then go on a wild adventure as the ball rolls out of the stadium, into the city, the ocean…even outerspace! In Stuntpit, players will test their craziest stunt moves as football goal keepers while diving to catch the ball without fear of getting injured.

Alongside the two sports-themed attractions, and as a key component of the second phase of innovation, Harrow International associated school Innovation Leadership Academy (ILA) Hengqin will offer world-class bilingual schooling to families in the Greater Bay Area and significantly enhance the provision of holistic education across South China, catering to the needs of both local and overseas families and setting new standards of educational excellence. 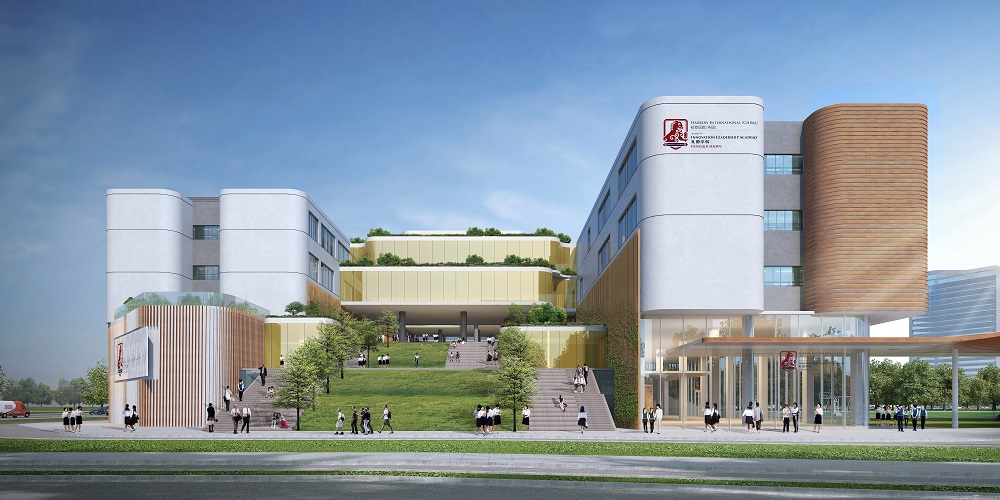 offering grade 7-12 education for approximately 900 students as well as facilities for boarding students.

Managed and operated by Harrow International (China), ILA Hengqin offers world-class education that draws heavily on the 450-year legacy, ethos and spirit of Harrow School UK - a renowned institution whose famous alumni include former British Prime Minister Sir Winston Churchill and several Nobel Laureates. In Asia, Harrow International has been developing and managing schools for over 20 years, with exceptionally successful schools in Bangkok, Beijing, Hong Kong and Shanghai, each of which is regarded as  delivering the gold standard in premium-quality education.

The curriculum at ILA Hengqin is structured to  bring together the very best of British and Chinese educational philosophies, with the vision to prepare future generations for the challenges of an ever-changing world, empowering them with a lifelong ability to compete successfully, while cultivating their creative and practical skills and helping them develop appropriate values as distinguished members of Chinese society and the global community. When it first opens in September 2020, the school will initially offer grade 7-12 education for approximately 900 students as well as facilities for boarding students.

Phase II of Novotown targets to open in phases before 2022

“Novotown represents an ambitious effort by Lai Sun Group to create and inject cultural elements so as to develop the Greater Bay Area and reinvigorate its community,” said John Tse. “With various key partners confirmed, Phase II of Novotown targets to bring more exciting entertainment experiences and community facilities in phases by 2022.”